The “new” Origine Group almost made a debut at Asia Fruit Logistica 2018 (5-7 September, Hong Kong), after the acquisition of Compagnia Italiana della Frutta (read news). Asia Fruit Logistica is an ever growing trade show in a strategic area of the world: “Italian operators in the industry are offered an exceptional combination of business opportunities and networking here,” said Alessandro Zampagna, General Manager of Origine Group. Booth D08, Hall 3, in CSO Italy’s collective exhibition space: this is where Origine Group will showcase its portfolio of brands – Sweeki, Pera Italia, Made in Blu and Fruitaly, under which the company mainly exports kiwis and pears to Europe, Asia and North America. With its 10 partner companies (nine Italian and one Chilean), Origine Group accounts for major production amounts – over 120,000 tons of kiwis and 80,000 tons of pears. As for Italian pears, that are currently being harvested in full swing, the first loads of Abate and Williams varieties are ready to be shipped. “The season is shaping up to be a great one – said Zampagna – with a properly-sized product having good appearance and high sensory quality. The news is that, starting this year, Origine Group’s pears will also be marketed under Made in Blu and Fruitaly brands, as well as Pera Italia.”

The marketing campaign for the Sweeki branded Chilean kiwifruit has given us great satisfaction. There is a lot of anticipation, however, for the Italian kiwifruit and, after a particularly difficult year marked by low-volume production of small-sized kiwis, we look forward to a good harvest in terms of quantities, size and quality. The first yellow kiwifruit will be picked no later than the first half of September, so shipments can be made before the end of the month. For green kiwifruit, which is the most important product, we will have to wait, however, until October,” Zampagna concluded. 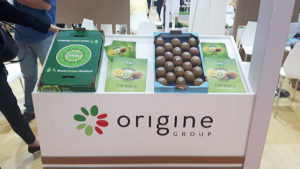